There is only one goal for the ACETA safety campaign: protecting the safety of the community and workers in regard to commercial and entertainment technology. ​ 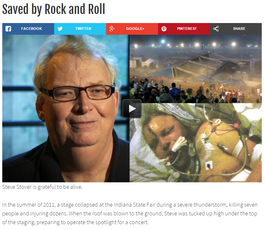 Click on the pic or this link for the full story from Steve Stover, a highly experienced lighting tech. It's horrific. And it's everyone's nightmare.
Why now?  Because the evidence of non-compliance across a number of sectors is growing alarmingly.  Whether it's the auto industry which had a less-than-exemplary year in 2014 when 800,000 vehicles were recalled in Australia alone due to a variety of issues including faulty airbags or an estimated 40,000 homes which have been installed with sub-standard electrical cable which, it is now revealed, can become brittle and spark, the safety issues have been widespread.

ECD Solutions magazine ran an editorial _about cable recalls. The number of organisations now being pursued through the Federal Court by the ACCC is long and includes the electrical wholesalers industry association EWAA. The Australian electrical industry body NECA is calling for a register of compliant products and manufacturers, which is more red tape but may be the only way to solve it unless there is vigilant scrutiny at the the point of import and the regulators are more active.

Commercial and entertainment technology is not exempt.  Stage collapses overseas are well known. Fake and directly imported sub standard gear, and poor installations and unsafe work practices by some sectors of the profession put everyone at risk.  The usual defence is to state that Australia has high standards and that's correct.  Australia has very high standards.  But they are only useful if they are complied with.  That's where the problem lies.

How can ACETA help?

ACETA is doing two things:
If the supplier you chose to use isn't on the ACETA membership list then you are strongly advised to ask them to demonstrate their compliance with the above four areas. If they are an ACETA member you have more reassurance that they are compliant.

Letters have now been sent to all of these councils.  Only one so far has responded, which is City of Sydney.  We received a letter from the mayor and from the CEO_.

Prevention helps with the cure

Some companies are also putting steps in place so you can check if the gear you intend to buy or have bought is genuine and, therefore, compliant.

Shure:  Confirm you have a genuine Shure product by using their online serial number checker.  Please also note that genuine Shure products sold in Australia through Jands, which is the authorised importer, have a silver hologram sticker on the outside of the box. More information about how to spot a fake Shure is here.

Fake JBL:  a company based in Melbourne is under investigation for selling fake JBL SRX and VRX products.  More information here from Ramblings of a Techie and here from CX magazine which includes information about how to spot fake gear.

One final word of warning: there is no such thing as an international warranty. The Australian Consumer Law (which replaced the Trade Practices Act) states that you should take any product service or warranty issues to the point of sale, in other words take it to whoever you bought it from. That organisation then has to take responsibility for it. They can't tell you to contact the manufacturer or distributor.