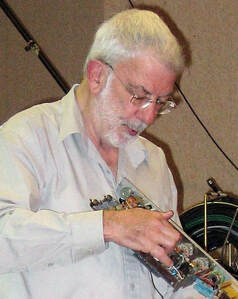 People like Graeme are the quiet achievers or secret strengths in our industry.  It's an understatement to say that     there is much that wouldn't have happened but for his expertise and tenacity. His work lives on in many of the           products we see around us today.

Graeme was born in Victoria, the family moved to Western Australia, and Graeme had his schooling and                      completed a radio apprenticeship there under a hard taskmaster. It has stood him in good stead. Even as a child      he was making and inventing, and that passion was lifelong. He was keenly interested in the great Australian              bush, and he and his family enjoyed frequent camping holidays. After several moves and changes of jobs he and      Sylvia made their home on the suburban fringe of the Adelaide Hills – the best of both worlds.

He was always fascinated with new technology, learning as much about it as he could, and frequently devising           ways to improve it! He was continually learning, and his child-like enthusiasm for new things, new inventions,             stayed with him all his life. Graeme was a mentor’s mentor, always willing to pass his knowledge to others, and         indeed his part time position at DSTO was just that, helping train a new generation of analogue engineers.

Graeme had a long and varied career, from running his own transceiver company in Sydney, working at Philips Micro-electronics at Hendon in the 1980s, Adelaide, joining and leaving CODAN Adelaide more than once, and consulting with Duntech about audio power amplifiers. His major activity was with DSTO and related entities, working on the Over the Horizon radar and its successors. A recent project was a compact and powerful HF radio transmitter module, using balanced circuitry and ingenious coupling transformers of his design. He was a prolific inventor, and had the craft and engineering skills to make many of them himself.

Above all, he was an analogue man, inventing the double balanced microphone preamplifier while at Philips, and a plethora of vacuum tube based audio amplifiers. His 1984 balanced microphone design lives on in modern IC designs, the SSM 2015, and the THAT Corporation 1510 and 1512. He was always thinking in terms of balanced bridges, symmetry, circuits which cancelled distortion, had improved common mode rejection ratio, and so on. He was proud that he had presented papers at all the AES Australian Regional Conventions in the late 80’s and early 90s.

Apart from RF work, some of his other hobbies were audio, photography, caravanning and camping, steam engines, red wine, and animated discussion about anything related to audio! He was a member of several clubs and associations – the Audio Engineering Society, the Historical Radio Society of South Australia, the Australasian Telephone Collectors Society, and others.

For some of Graeme's papers please go to this link kindly posted by an AES member.
​
This tribute was written by David Murphy, Chair of the Adelaide Section of the Audio Engineering Society, who has kindly approved its use here on the ACETA website.
Copyright 2022 ACETA.org.au