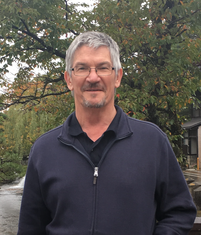 Gary Pritchard is the founder and major shareholder in LSC Control Systems, an Australian company well known   throughout the world for their lighting and power control products.
​
Gary obtained his degree in Communications Engineering from RMIT in the late 1970s and followed that up with a post-   graduate diploma in Information Technology in 2000.

He started his professional career with Rio Tinto in their R&D department and moved on to Thycon, a designer and   manufacturer of large UPS systems in the early 1980s.

Having designed lighting products for a friend in his spare time, LSC finally became a full-time affair in 1983 and the   release of the revolutionary Precept lighting control console followed shortly thereafter.

During 1986, Gary got involved in the development of DMX512 and LSC became one of the first manufacturers in the   world to release a DMX512 product in late 1986.

In the following years, LSC continued to expand and Gary took their products to the world while spending much time promoting the benefits of DMX512 to the Australian industry.

He has been involved in virtually all LSC product designs with a keen eye on innovation and this innovation resulted in Gary and the LSC team receiving an Australian Design Award and a Powerhouse Museum Award for the Axiom lighting console.

Gary continues at LSC and in recent years has returned to his passion of designing products where the company focus has moved more to intelligent power control catering for the increasing demanding needs of all aspects the entertainment industry, sound, lighting and video.
Copyright 2022 ACETA.org.au