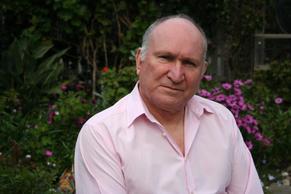 Frank Hinton
Frank’s career began in the early 1960s as a pre-teenage musician, leading in 1966 to a position in Brash’s Musical Instrument department. Soon after he joined the youthful but now legendary manufacturer, Strauss Sound Systems. Strauss grew quickly to achieve high production levels and professional market share based on leading edge amplifier technology, but was wound up early in 1970 due to inadequate management.  With several others, he immediately founded Fhone Sound Equipment, but not long after formation was conscripted for National Service, joining the Army Band Corp in late 1970 to ultimately serve as a musician and arranger. On completion of service in 1973 he returned to the Brash organisation, rising to departmental management and ultimately to the Brash/Allan Group executive as musical instrument product manager. Early in 1985 Frank left the company to form ATT Audio Controls Pty Ltd, to represent the interest of several UK based industrial audio manufacturers. In 2007 a new company Classic Audio Designs Pty Ltd was formed where he engaged in extensive research followed by an intense period of development that ultimately realised the Grover Notting critical listening platform. Today ATT continues as an Australasian representative of entertainment technology and Classic designs, manufactures and exports critical listening systems and devices, with both companies being niche by choice and family owned.  In 2009 Frank was part of a small industry group who ultimately established ACETA.
​
“The ACETA Presidents acknowledged time management, organisational and communication skills made him the ideal candidate to present the inaugural industry leadership mentoring seminar.”
Copyright 2021 ACETA.org.au